Chitradurga is an administrative territory of Karnataka. The district takes its name from Chitrakaldurga, an umbrella-shaped lofty hill found in that location.  It is situated in the valley of the River Vedavati, with the Tungabhadra River flows in the northwest, and showcases quaint and colorful landscape.  Chitradurga was also known by many other names such as Chitaldrug (in the British Reign), Chitrakaldurga, Chittadrug and many more. Nevertheless, the district headquarters owes its name to ‘Chitrakaldurga’ and ‘Picturesque Castle’.  Chitradurga lies among high, bold hills, beautiful valleys and huge towering boulders in numerous shapes.

Chitradurga has an optimal agro base climate, thus advisable for boosting agriculture and horticulture. The district has a total land area of 8,436 sq. km with 9.5% of it capped by forests. 15.79% of the land area is uncultivated along with 24.06% land remaining. However, the district’s economic growth is dominated by agricultural revenue since 50% of the net area of the district is under cultivation. Various types of food and commercial crops are cultivated because of the favourable climate conditions.

As it is situated in the heart of the Deccan Plateau, the district has enriched deposits of limestone, deep reserves of luxurious minerals such as gold, green quartz and so on, and abundance of different metals such as iron ore, copper and manganese ore.

Besides the normal power transmitted by the Bengaluru (Bangalore) Electric Supply Company Limited (BESCOM), the district has another very durable source of power supply. As it enclosed by mountainous terrain from all sides, the district is always pleasant and windy, and is also one of the best sites for high wind in the country. The district is said to be the 4th largest producer of wind energy in the country.

The district lies in the middle of the valley formed by the river Vedavati, with river Tungabhadra flowing in the northwest. Since the district has various inexhaustible sources of water supply, dams and reservoirs are extensively used for water storage, irrigation and various other purposes. Besides, the region receives 744 mm of annual rainfall too.

Chitradurga is located in the heart of Deccan Plateau, making it naturally rich in mineral resources such as limestone, cement and so on. The district claims to have highest reserves of limestone estimated to 93.05 million tonnes, and a large number of large and medium cement industries. The district is set for mining activities and is considered as an upcoming district for cement and steel industries as a strong adversary. Besides, the district has other mineral reserves such as gold and copper in abundance.

Chitradurga’s GDP stands at INR 52.26 billion, contributing only 1.7% to the state GDSP.  Moreover, the trend is observed to be growing, with agriculture and industries associated to with being the highest contributors at 3.5% in 2012-2013.

Chitradurga has an economy where agriculture is predominant with over 50% of the net area under cultivation. Major crops like Paddy, Ragi, Jowar and Maize are cultivated along with an array of pulses such as Red gram, Horse gram, Green gram, Black gram, Bengal gram, Tur and so on. Commercial crops like Groundnuts, Sunflowers, Cotton and Tobacco are also popular. The district has a rich livestock as well with total cattle population of 1.5 million and poultry population of 0.9 million as per 17th livestock census.

The growing textile industry in Chitradurga has a lot to offer to the economy of the district. It also constitutes the second highest number of medium and large textile industries and 12% of SSI units in the district with a large number of SSI units occupied in the food processing sector. According to reports, 20% of the SSI units are involved in agro-based and food processing activities.

The administrative city of Chitradurga counts as a major city when it comes to tourism and travel. Its unique history, gigantic forts and temples and scenic beauty make it one of a kind. This ancient little city is surrounded by huge boulders and towering hill forming magnificent shapes and sizes, making it an ideal place for trekking. Besides its lofty landscape, the city is also famous for its extravagant fortress called Kallina Kote or the Stone Fortress. Surrounded by old forts and hills, the city also has a pretty old history which traces back to 3rd millennium B.C.

This remarkable city has a beauty and history of its own, which encourage more tourist attraction. The following are some places in Chitradurga which hard to overlook: 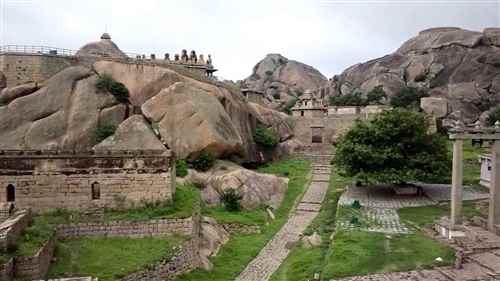 The fort lies in the heart of the valley of River Vedavati and overlooks the town. This majestic fort is the most notable attraction in Chitradurga. Established between 17th and 18th century, the fort is surrounded by gigantic hills and towering rock formations. The entrance of the fort is embellished with the carvings of seven hooded cobra, twin headed bird Gandaberunda, the royal swan Rajhansa and a lotus flower. The great monument has been ruled by many known rulers and is naturally maintained, even though there are no cementing measures. The premises of the fort include many temples, but the most distinguished among them are the Hidimbeshwar Temple, Banashankari Temple, Bombe Chavadi Mandap and Ekanatheshware Temple. 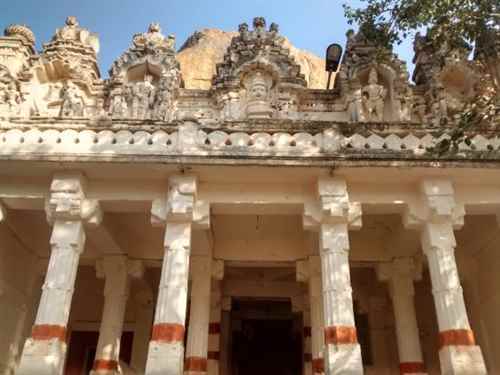 Being carved out of a massive rock itself, the temple stands out distinguished and extraordinary among other twenty temples located inside the Chitradurga Fort. The temple has its history associating to the epic of Mahabharata and is one of the oldest temples in the fort. It mostly demonstrates Dravadian Sculptures. There is a huge kettle drum which is said to belong to the great Bhima, one of the Pandavas. The distinct culture and mythological importance of the temple marks it as must-do pilgrim.

Chandravalli
Chandravalli is an archaeological site. The site is bounded by the hills Chitradurga, Kirabanakallu and Cholagudda. It was first excavated by R. Narasimhachar, the Director of Department of Archaeology and Museums of the Mysore State. Further excavations were carried out by H. M. Krishna in 1928-29. Recent excavations of the site include remains from many dynasties and period, tracing back to the 2nd century:

Bruhan Mutt
Also known as Murugarajendra Mutt, the Bruhan Mutt was built in the honour of the famous guru of Veershaiva Community. It’s at a distance of 3 km from Chitradurga and is an exceptional tourist spot. 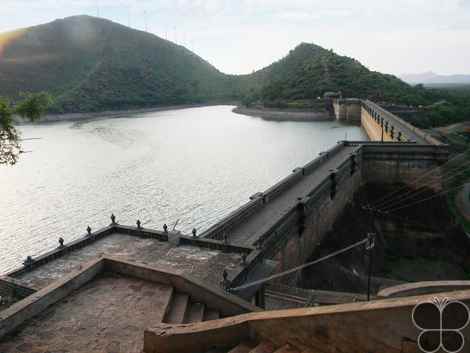 It is also known as Mari Kavine and is the oldest dam of the state. It was built across River Vedavati by the Mysore Maharajas before Independence. It’s an admirable piece of architecture and has been a tourist attraction for years, but has been neglected recently as a prime tourist admiration.

Chitradurga has excellent accommodation facilities where there are hotel which provide 24 hours check and check out services with free wifi zones, parking facilities, fine dining and a lot more. Some of the hotels which would make any travellers experience to this city memorable are as follows:

The different modes to reach to this city are as follows:

The city is well-connected to major cities, with availability of both public and private buses. The place has a station of its own, Chitradurga Railway Station, which is connected to various major cities of the country. However the station is equipped with limited train services since it is situated on the branch line that originates from Chikjajur. Lying southwest of the Chikjajur Rail Junction is the major railhead. Beside there are daily rail services to Bangalore and weekly rail services to Mumbai.