The little town of Chitradurga has a rich cutlural heritage and also boasts of a rich history. There are a lot of places that have mythological and historical significance here. 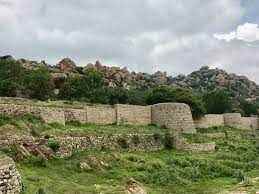 The history of this particular district of Karnataka can be traced back to 3rd Millennium B.C. One of its legends goes back to the time of Gods, where, according to the epic of Mahabharatha, there lived a man-eating rakshasa named Hidimba with his sister, Hidimbi. Hidimba was known for his terror and anger while his was sister was considered to be calm and peace-loving. When the Pandavas with their mother, came across the valley during their exile, they encountered the rakshasa  Hidimba. Bhima, one of the Pandavas, had a duel with Hidimba in which the rakshasa was killed. It is believed that in that duel, the rocks and boulders were involved as arsenals. In fact, the boulder and other rock formations on which the city lies, is a part of one of the oldest rock formations of the country. Thereafter, Hidimbi and Bhima got married and had a son named Ghatotkacha. He was half-rakshasa and so was gifted with many magical powers from birth.

The rocky terrain of Chitradurga has been witness to legendary battles and significant episodes of the epic Mahabharata. However, there is one legend that stands out in particular. During the reign of Madakari Nayak, the town of Chitradurga was encircled by the troops of Hyder Ali. A chance sighting of a woman entering the fort Chitradurga through an opening in the rocks became an opportunity for Hyder Ali to push in his soldiers through that hole. The guards on duty were on lunch. The wife of one of the guards, Obavva was passing by the hole to collect water, when she noticed soldiers emerging out of the opening. She was carrying an Onake with herself, a long wooden club meant for pounding paddy grains. On seeing the enemy, instead of being flustered and anxious, she killed Hyder Ali's soldiers one by one as they attempted to enter the fort and hid their bodies. Obavva's husband, upon his return from his lunch was stunned to see Obavva standing with a blood stained Onake amidst hundreds of dead bodies of the enemy. Together, both wife and husband, fought the enemy with bravery, but as both of them were about to kill all the soldiers, Obavva died. The opening in the rocks still remains as a historical witness for the story and is also often known as Onake  Kindi. Though her brave attempt saved the fort on that occasion, Madakari Nayaka could not confront Hyder Ali's attack in 1779 and in the ensuing battle, the Chitradurga fort was lost to Hyder Ali.